History of the Sewing Machine

The history of the sewing machine is a lengthy and involved tale that spans almost 100 years. 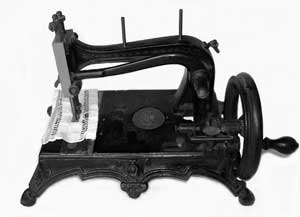 The tale starts in Germany, moves to England, then to France and ends in America.

Early tries by inventors in all four countries tried and failed to produce a mechanical sewing machine.

People were joining two pieces of material with thread since the end of the last Ice Age. They used plant and animal fibers to sew animal hides together. Slivers of bone with an eye were used as a needle.

A German inventor named Karl Weisenthal received the first patent for a sewing machine in 1755. The machine was never built. Thomas Saint, a British inventor, filed for a patent in 1790 for his sewing machine. His invention improved the way boots and shoes were made.

This machine used an awl that first made a hole. A second mechanism pushed a thread through the hole and picked up a bottom thread.

French tailor Barthelemy Thimonnier received a patent for the mechanical sewing machine in 1830. His machine used a hooked needle that was controlled by a cord attached to a hand crank. The machine pushed a needle down through the material and a spring pushed it back up.

Within a year, 80 of these machines were in use in Britain, sewing uniforms for the French army. Tailors, fearing that this new machine would cause unemployment, stormed the factory, destroying it and all the sewing machines inside.

About the time Thimonnier was developing his sewing machine, American Walter Hunt was developing a machine that used two needles working together. In 1834, Hunt discovered that if the top needle met a bottom needle moved by a shuttle, an interlocking straight stitch was created.

Hunt abandoned this novel idea as he worried that tailors and seamstresses might lose their livelihoods because of his machine.

Elias Howe of Massachusetts improved on Hunts design by adding a grooved needle. While the locking stitch held firm, his machine could not sew long stitches and could only sew straight seams.

Howe marketed his machine in England where it was adapted for making corsets. When he returned to America, he found there were variations of his sewing machine in use.

In 1851, Isaac Singer used Howe’s machine as a template to design his sewing machine. Singer added a rigid arm for needle stabilization, a pressure foot to hold the materials together and a foot treadle to replace the hand crank used in Howe’s design. 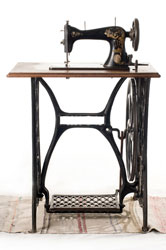 Howe filed a lawsuit claiming patent infringement. At that point Singer had already received 20 patents for his design. He was selling these machines and offered a repair service.

Singer is usually the first name associated with the history of the sewing machine. However, without the contribution of Allen Wilson who invented the rotary bobbin, the ingenuity of Hunt, Howe and Singer may have eventually failed. Singer reached an agreement with Howe that resulted in royalty payments to Howe for his design. The modern sewing machine was born.

Technology takes time to develop. The history of the sewing machine is a long story. The men who designed this machine to improve the daily lives of everyday people will be remembered for their contributions.


Go to the top of this History of the Sewing Machine Page
Return to the CreativeSewingTips.com Home Page

Powered by Solo Build It!